Please contact the chapter for additional event details.
View All

Please join us for a fireside chat with Tom James, chairman emeritus, and Paul Reilly, chairman and CEO, as they describe how important effective corporate governance and community involvement have been in the long-term success of Raymond James Financial. In addition to describing these important ESG principles, they will cover how these values are woven into the culture of the organization and brought to life in the communities where the firm operates. The venue for this program - The James Museum of Western & Wildlife Art - is a living example of the importance of community involvement to the leaders of Raymond James Financial. You will be invited to tour the museum following the presentation. 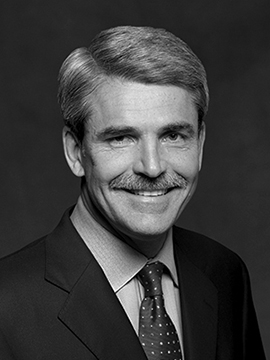 David Walker
Chairman of the Board

Thomas A. James is Chairman Emeritus of the Raymond James Financial, Inc. (NYSE: RJF) Board of Directors. He was previously CEO and Chairman of the Board for more than 40 years before handing over those roles to Paul Reilly in 2010 and 2017, respectively. From 2010 to 2017, he served as Executive Chairman of the Board. He also is Chairman of subsidiary broker/dealer Raymond James & Associates, Inc., (member New York Stock Exchange/SIPC) and affiliate Eagle Asset Management. Mr. James graduated magna cum laude from Harvard College in 1964 and from Harvard Business School in 1966, where he was a Baker Scholar and graduated with high distinction. He also holds a Juris Doctor from Stetson College of Law, St. Petersburg, Florida, and obtained his Certified Financial Plannerâ„¢ certification in 1978. Mr. James has previously served on the boards of numerous public companies. In addition, Mr. James is a past chairman of the Financial Services Roundtable, the Securities Industry Association (now SIFMA), the Southern District of the SIA and the District 7 Business Conduct Committee of the National Association of Securities Dealers, and a past president of the Florida Security Dealers Association, as well as Raymond James Bank, NA and Heritage Family of Funds (subsidiaries of Raymond James Financial, Inc.). Mr. James is a past member and chairman of the Florida Council of 100 and member of the board of trustees of the Salvador DalÎ¯ Museum. He serves on the Board of Dean’s Advisors at Harvard Business School and is chairman of the board of the Chi Chi Rodriguez Youth Foundation. He is also a past chairman of the Florida Council of Economic Education. Mr. James has been an active participant with United Way of Tampa Bay, as a member of the board of directors, campaign chair and as founding chairman of the organization’s Alexis de Tocqueville Society in 1987. He is a past member of the board of Junior Achievement of Pinellas County and has served as Commodore of the Treasure Island Tennis & Yacht Club. Mr. James has received numerous awards and honors for his industry leadership, support of the arts, philanthropic activities and community service. His interests include tennis, golf and art collecting, particularly art of the Southwestern United States. Certified Financial Planner Board of Standards Inc. owns the certification marks CFPÂ®, CERTIFIED FINANCIAL PLANNERâ„¢ and CFPÂ® in the U.S., which it awards to individuals who successfully complete CFP Board’s initial and ongoing certification requirements.

Paul Reilly became chief executive officer of Raymond James Financial in May 2010, after joining the firm’s management team as president and CEO-designate in May 2009. He has served on the firm’s board of directors since 2006. From July 2007 to April 2009, he was executive chairman of Korn/Ferry International, a global provider of talent management solutions with more than 90 offices in 39 countries throughout North America, Latin America, Europe, the Middle East, Africa and Asia Pacific. Mr. Reilly began his tenure with the company as chairman and CEO in 2001. Prior to Korn/Ferry, he was CEO at KPMG International, a firm of more than 100,000 employees with annual revenues of $12 billion. Based in Amsterdam, he was responsible for the overall strategy and implementation of the firm's products, services and infrastructure on a global basis. Before being named CEO at KPMG, he ran the firm's financial services business and earlier had held senior management positions in its real estate consulting group. Mr. Reilly holds his Bachelor of Science degree and MBA from the University of Notre Dame and remains active with the school, serving on the Mendoza Graduate Alumni Board and the Business Advisory Council, and being recognized as a recipient of the Distinguished Alumnus Award in 2004-2005. In addition to his degrees, he earned the Certified Public Accountant designation. He is a financial services industry leader, serving on the board of the Financial Services Roundtable and as an executive committee member of SIFMA, and also is active in charitable causes, including involvement with the National Leadership Roundtable on Church Management, Our Lady of Divine Providence House of Prayer in Clearwater, Florida, the United Way Suncoast, and the American Heart Association’s Tampa Bay Heart Walk.

Chairman of the Board

David F. Walker is chairman of the Board of Directors of Chico's FAS Inc., a leading omnichannel specialty retailer of women's clothing and accessories. He also serves on the Boards of Directors of Commvault Systems Inc., a leading provider of data protection and information management solutions, and CoreLogic Inc., a global property information, analytics, and data-enabled solutions provider. Walker previously served on the boards of directors of Paradyne Networks Inc. from 2003 to 2005, First Advantage Corporation Inc. from 2003 to 2009, and Technology Research Corporation Inc. from 2004 to 2010. He also serves on the Board of Directors of the Florida Chapter of the National Association of Corporate Directors (NACD) and the Florida Hurricane Catastrophe Fund Advisory Council, and he has served on the boards of several other private and nonprofit entities throughout his career. Walker was employed as the director of the Accountancy Program at the University of South Florida St. Petersburg from 2002 through 2009, and he also served as director of the school's Program for Social Responsibility and Corporate Reporting during that time. For approximately 27 years through 2002, he was with Arthur Andersen LLP, a global accounting and consulting firm, serving as partner from 1986 until 2002 and partner-in-charge of the firm's assurance and business advisory services practice in the Florida/Caribbean region. Walker is an NACD Board Leadership Fellow, a licensed Certified Public Accountant, and a certified fraud examiner. He holds a Master of Business Administration from the University of Chicago Booth School of Business.